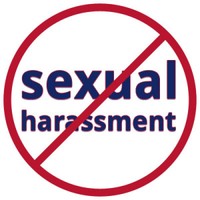 Sexual harassment is a form of sex discrimination and is unlawful under federal, state, and (where applicable) local law. Sexual harassment includes harassment on the basis of sex, sexual orientation, self-identified or perceived sex, gender expression, gender identity, and the status of being transgender.

Sexual harassment includes unwelcome conduct which is either of a sexual nature or which is directed at an individual because of that individual's sex when:

A sexually harassing hostile work environment includes, but is not limited to, words, signs, jokes, pranks, intimidation or physical violence which are of a sexual nature, or which are directed at an individual because of that individual's sex. Sexual harassment also consists of any unwanted verbal or physical advances, sexually explicit derogatory statements or sexually discriminatory remarks made by someone which are offensive or objectionable to the recipient, which cause the recipient discomfort or humiliation, which interfere with the recipient's job performance.

Sexual harassment also occurs when a person in authority tries to trade job benefits for sexual favors. This can include hiring, promotion, continued employment or any other terms, conditions or privileges of employment. This is also called "quid pro quo" harassment.

Any covered person who feels harassed should report the conduct so that any violation of this policy can be corrected promptly. Any harassing conduct, even a single incident, can be addressed under this policy.

The following describes some actions that may constitute unlawful sexual harassment and that are strictly prohibited:

b)      Unwanted sexual advances or propositions, such as:

c)      Sexually oriented gestures, noises, remarks or jokes, or comments about a person's sexuality or sexual experience, which create a hostile work environment.

d)      Sex stereotyping, which occurs when conduct or personality traits are considered inappropriate simply because they may not conform to other people's ideas or perceptions about how individuals of a particular sex should act or look.

e)      Sexual or discriminatory displays or publications anywhere in the workplace, such as pictures, posters, calendars, graffiti, objects, promotional material, reading materials, or other materials that are sexually demeaning or pornographic. This includes such sexual displays on workplace computers or cell phones and sharing such displays while in the workplace.

f)      Hostile actions taken against an individual because of that individual's sex, sexual orientation, gender identity, and the status of being transgender, such as:

Any person who believes they have been a target of sexual harassment may also seek assistance in other available forums, as explained below in the section on Legal Protections.

The Title IX Officer and Civil Rights Compliance Officer (CRCO) for the Avon Central School District is the Executive Director of Pupil Services who can be reached at (585)-226-2455 ext. 1417 or located in the Pupil Services Office in the grades 5/6 wing of the Middle School.