Rob Lupisella has been the Principal at Avon Elementary School since 1998.  Prior to coming to Avon, he was employed by the Churchville-Chili Central School District where he began his career as a sixth grade teacher shortly after graduating from SUNY Brockport with a bachelor’s degree in history.  He received the degree of Master of Science in Education in 1994, and his Certificate of Advanced Study in Educational Administration two years later. 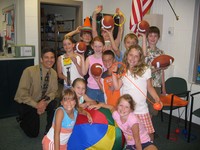